Finding investment ideas is hard in any market, much less one that seems to be driven by changing, short-term sentiment about the impact of a pandemic and in particular, the social distancing it prompted. Social distancing has affected our lives in somewhat strange ways. Handshakes have given way to nods and waves. Masks are now fashion accessories. Rush hour traffic is probably more applicable to the internet than it is to our streets, and hotspots refer to cities with a significant number of coronavirus cases rather than locations of wireless networks. Undoubtedly, over the past six or so weeks, the COVID-19 pandemic has changed our behavior—and many are starting to wonder what changes will wane versus stay. Similarly, as we contemplate how to move forward with our investments, let’s take a closer look at how industries have been affected and try to understand what is temporary versus long-term, and more importantly, where opportunities lie.

Here are five areas that social distancing has significantly impacted and how that might be relevant to your investing strategy. 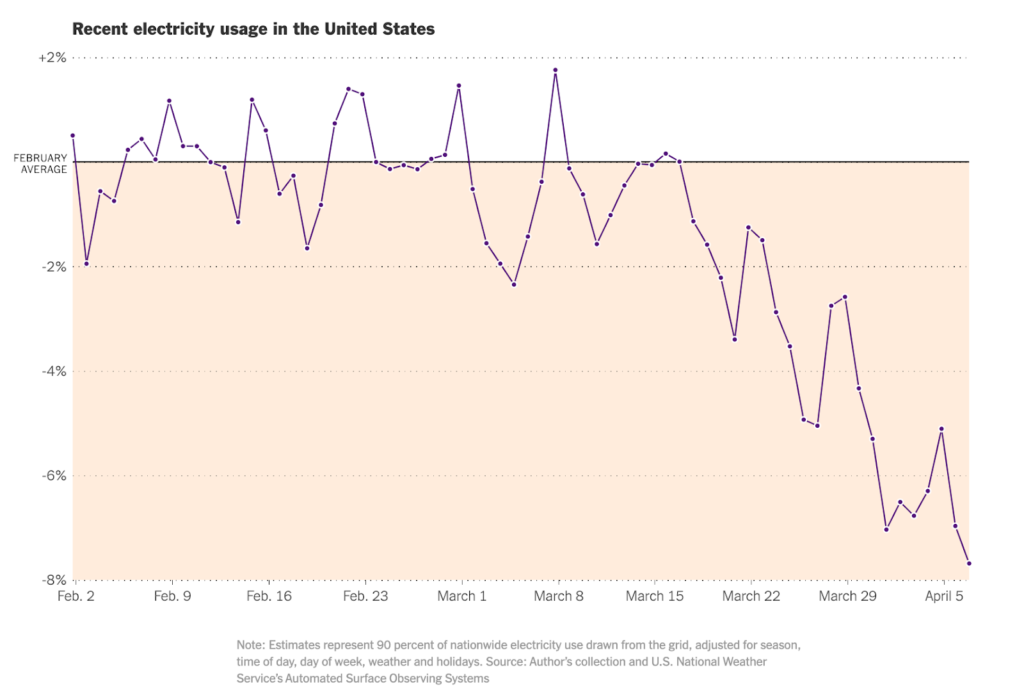 Source: The NY Times, Another Way to See the Recession: Power Usage Is Way Down

Electricity usage has long been thought of as one of the most immediate indicators of economic health, and a drastic fall in electricity usage, a faster indicator of a recession. However, despite that overall electricity usage is down, the utilities sector covers a basic necessity, and as noted by my colleague on investing in Black Swan Events, tend to consistently overperform during the recession stage of the business cycle.

Below we see that XLU, a very liquid Utilities Sector ETF has a neutral overall rating (previously bullish up to mid February before it fell below it’s long term trend). The majority of its holdings, which are largely electric utilities, are also neutral. While Utilities may not be trendy, high growth companies, there may be other considerations for having them in your portfolio, such as risk and dividend yields that you can read more about here.

*Source: The NY Times, Another Way to See the Recession: Power Usage Is Way Down

**Source: Business Insider, Electricity use in the US has plummeted more over the past 3 weeks than it did during the entire 2008 recession — and economists say that’s a more timely picture of this downturn’s true impact

***Source: Statista, Where is Power Shifting 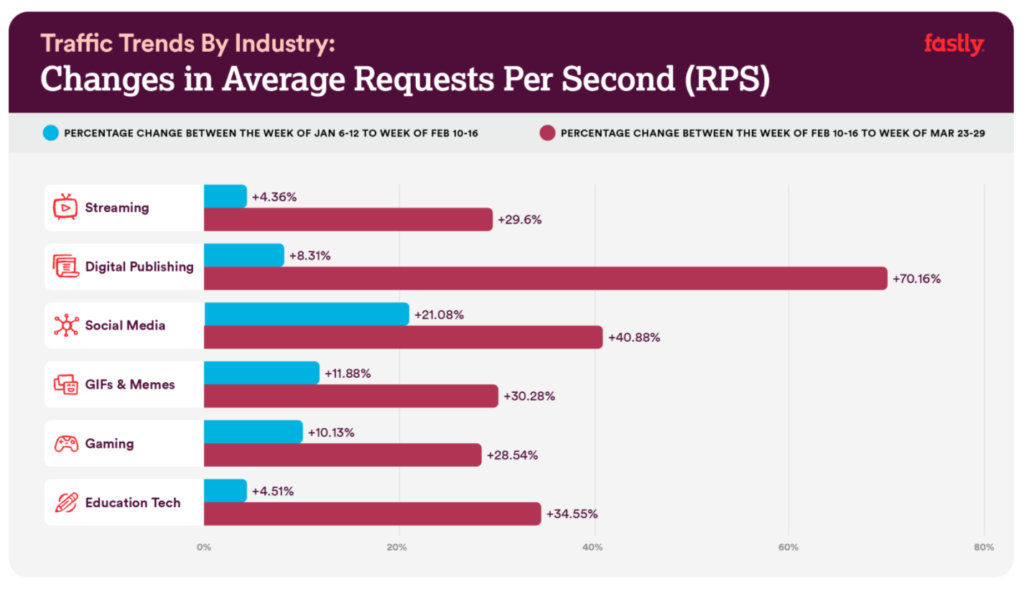 Source: The New York Times, The Virus Changed the Way We Internet

As boredom sets in or people “move their lives online” to continue their social interactions, many companies could benefit from this wave of activity. Already, Telecommunications giant, Verizon (VZ +9.82%), has seen a 10% increase in their stock price and had a bullish rating change as the price climbed over its long term trend. Netflix (NFLX +13.13%) saw a 13% increase and actually hit a new 52 week high in their stock price within the last month. XLC, a very liquid Communications Services ETF that holds Verizon, Netflix, and other internet and communication services companies has just started to rise above its long term average again, which might signal positive momentum if it continues. A neutral rating still suggests proceeding with caution, and relative strength vs SPY (SPDR S&P 500 ETF) is still negative at the time of this post.

**Source: MarketWatch, Netflix may have edge on competition as coronavirus keeps people looking for new shows 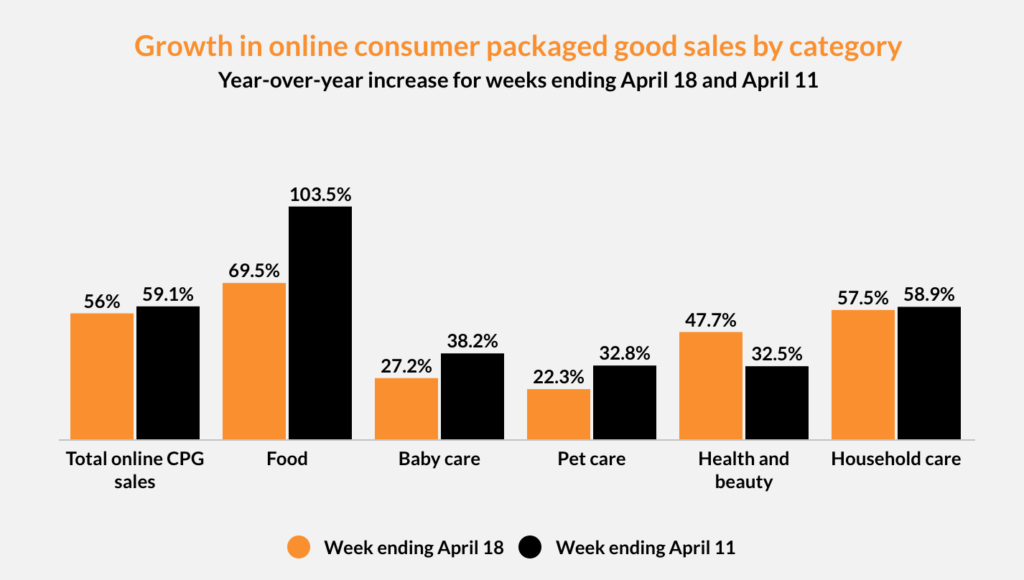 Source: Digital Commerce 360, Online grocery shopping has become a mainstream part of American life during the COVID-19 pandemic. Retailers have had to act fast to keep up with the demand.

There are two main categories in the Consumer Staples sector. First the products themselves and of course the companies that manufacture those products, and then the distributors, such as grocery stores, pharmacies, or big-box retailers that sell them to individuals. There has been a tremendous increase in both categories, with internet sales soaring as a channel to reach new audiences. The question here is for how long will this rush on products continue? XLP, the SPDR Consumer Staples ETF holds companies that operate in both categories and currently has a neutral rating. The Proctor and Gamble Company, which makes up the highest allocation of the ETF at 16%, has a bearish rating, largely due to poor Financials and Earnings. As the year progresses and that and other CPG companies report new earnings, this would be an area to watch.

*Source: Digital Commerce 360, Online grocery shopping has become a mainstream part of American life during the COVID-19 pandemic. Retailers have had to act fast to keep up with the demand. 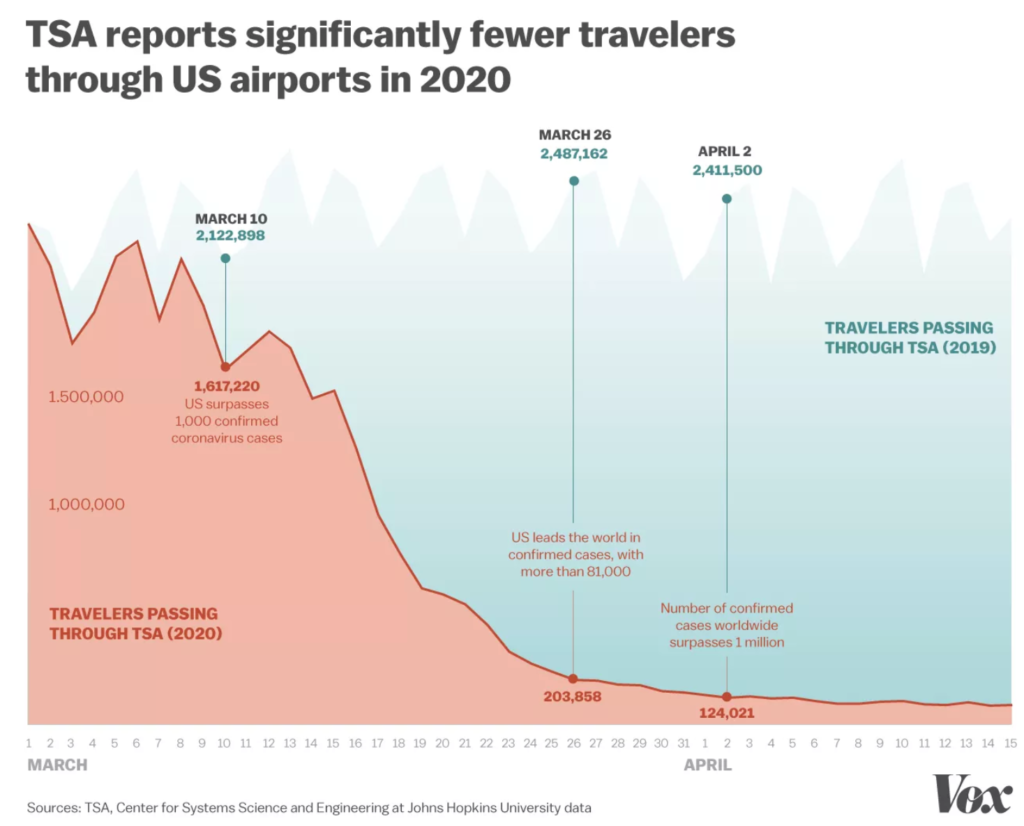 Source: Vox, How the coronavirus is disrupting US air travel, in 2 charts

Both business and personal travel typically go down during a recession. However, with the nature of the crisis, this isn’t just about tighter budgets or lack of funds for leisure spending. The physical constraints and closed nature of an airplane unfortunately create the exact environment that we are encouraged to avoid. Not only will it take a while for people to rebuild their confidence in air travel, but going forward, this could change the nature or business model of the industry itself. Given that, it’s no surprise that the 3-6 month outlook for JETS, the only airline-focused ETF, is bearish.

*Source: Vox, How the coronavirus is disrupting US air travel, in 2 charts

*Source: CNBC, US airlines are losing money for the first time in years as coronavirus ends travel boom 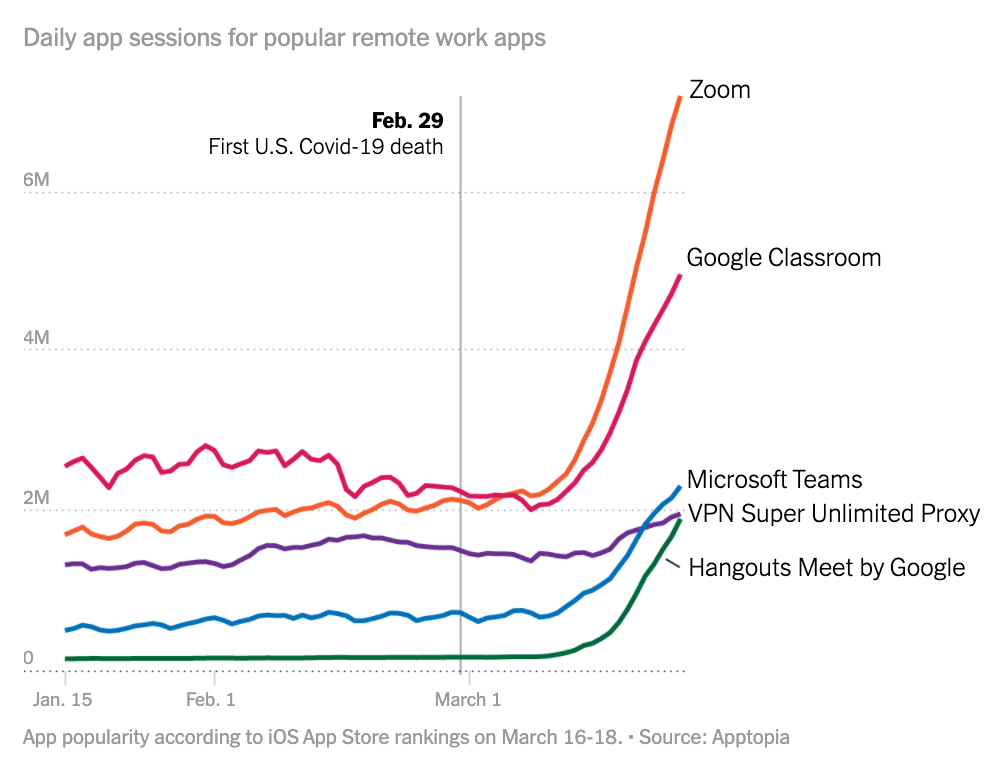 Source: The NY Times, The Virus Changed the Way We Internet

While the obvious Zoom, Google and Microsoft stand out, this may be an area to “dig for gold”! A number of companies support these online operations, for example to add security, or help with scheduling/ calendar management. Looking to a broader Technology ETF with exposure to these and other tech companies that might not be on your radar could have unexpected benefits over purchasing individual stocks. Below we look at XITK, The SPDR Innovative Technology ETF, which currently has a bullish rating. It has exposure to Zoom and a few other up and coming technology companies, albeit with a smaller AUM.

**Source: ZDNet, Microsoft Teams usage up by 12 million in the past week, hitting 44 million daily active users, due largely to COVID-19

***Source: The NY Times, The Virus Changed the Way We Internet

The stay-at-home orders only apply to people; the money isn’t standing still, it’s shifting. Healthcare is another sector that has broken away, while oil, of course, has taken a face dive.

With emergency dollars being pumped into an economy adjusting to a new norm, opportunities will naturally emerge. You’ll find them if you look hard enough.