Two weekends ago was the Baseball Hall of Fame Induction Ceremony. A time when the best players from their era are recognized for their career accomplishments with what is considered one of the highest honors in sports.

During the news coverage, there was a name that I saw mentioned more than a few times, Ken Griffey, Jr., as people began the debate of “who is the best player you have ever seen?” When I was growing up “Junior” was easily one of the most exciting players to watch. When I think of a Hall of Famer, he is the image that most often appears to me. So I started to go back to watch highlights from the 90’s and was just as in awe now as I was then. I urge you to search for “Ken Griffey Junior Highlights” in You Tube. You don’t have to be a baseball fan or even a sports fan to appreciate the raw talent that Junior possessed.

He was inducted into the Hall of Fame in 2016. The stats speak for themselves. A career .284 hitter with 630 home runs, 1,836 RBIs, and 184 stolen bases. On top of that, Junior won 10 Gold Glove Awards for his outstanding defensive abilities and was an All-Star 13 times in his 22-year career.

But what made Junior so special as a ball player? To make it to the major leagues, you have to be an exceptional talent which means that every player in the league has skills. The thing that set Junior apart was that he had all the skills. He was what is known as a “Five-Tool Player.” Junior hit for average and power while being an outstanding baserunner. In the field, he was one of the best, noted for his ability to play defense and his strong arm.

One of the definitions of breadth is “wide range or extent.” As a baseball player, Ken Griffey, Jr. had breadth.

As investors, we hear the term breadth used to describe the general health of the market. When the market rallies, we look to confirm the price action that we are seeing by noticing if there are a wide range of stocks participating in the rally. But how is breadth measured? There are a few ways and they can be used across time frames as appropriate for the specific style of the trader/investor.

One way to measure breadth is to look at how many stocks in the market are rising vs how many are falling. This can be done by keeping a running tally. Subtract the decliners from the advancers each day and add the difference to the previous day’s total. This is known as an Advance / Decline Line and gives investors a good read of the level of participation in the market trend. Generally, we want to see the A / D line moving up with the market to signal a healthy level of participation. Here is the A / D line for the S&P 500 and we can see that it has been moving in gear with the index over the past year.

A longer-term way to measure breadth is to look at the percentage of stocks in an index which are trading above their 200-day moving averages. This will tell us the extent to which the individual stocks in the market are trading within a long-term uptrend. Here it is for the S&P 500, with the number of stocks currently trading above their long term (200 day) trend line. 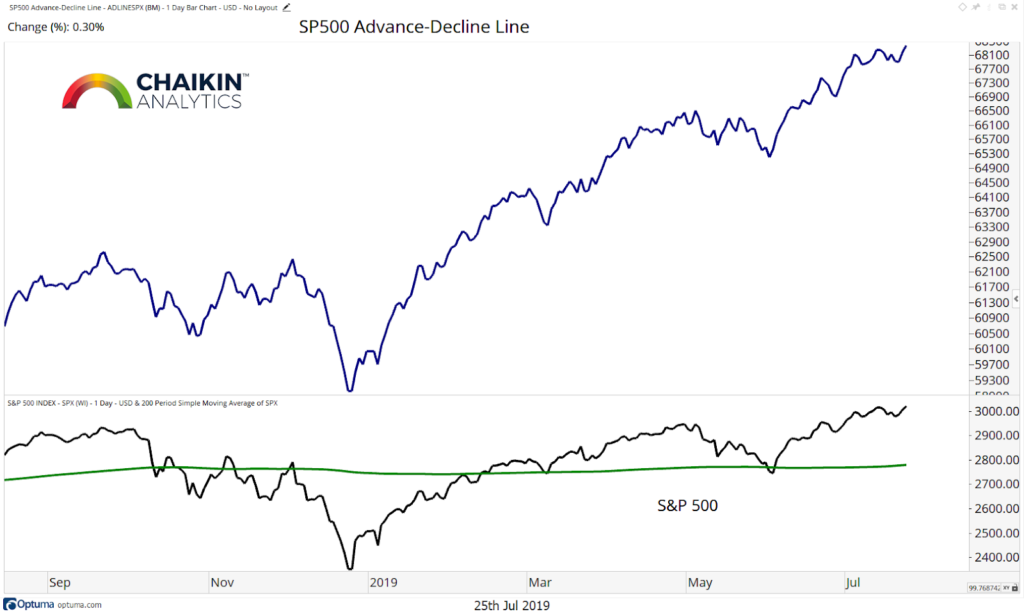 Traders with a shorter time horizon may focus on the percentage of stocks in the index trading above their respective 20-day moving averages. This will give us a view of the near-term trading dynamics at play in the market. Currently, we have a divergence where the new high for the index was not met with a new high by the indicator. This suggests that investors should be alert for a possible change of trend. 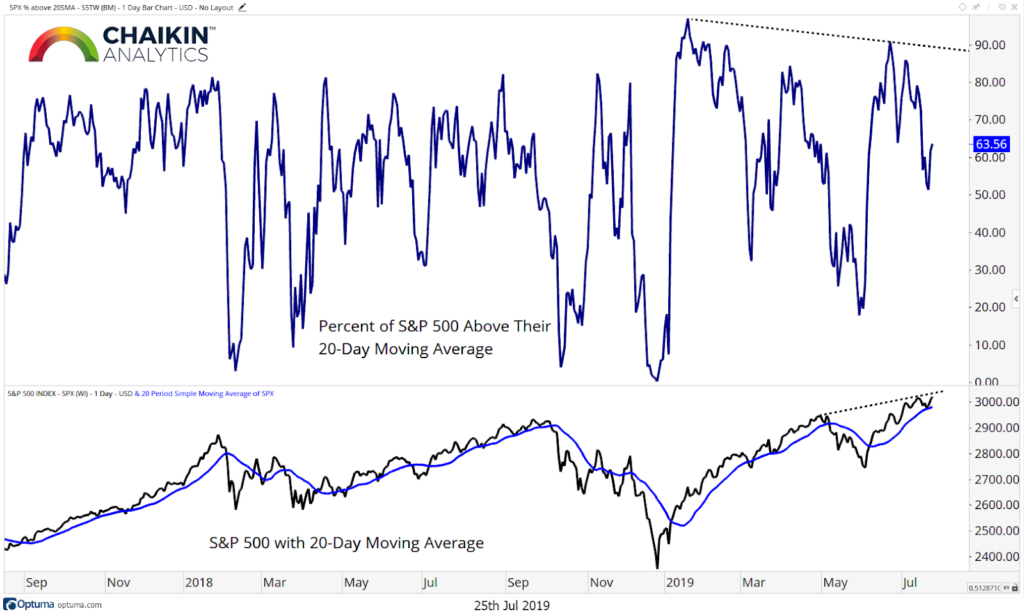 There are many other ways that investors can get a read on the breadth of the market, these are just three of the most popular measures. We can look at the percentage of new high vs new lows over different time frames. We can look at the percentage of stocks that are overbought vs oversold based on a momentum indicator such as RSI or MACD. What all of these indicators have in common is that they are all technical. They do not account for the fundamentals of the individual stocks in the market.

At Chaikin Analytics, we use our 20-factor model to come up with a Power Gauge Rating for over 4,000 equities every day. The model takes into account fundamental and technical factors to determine is a stock is likely to outperform or underperform the market over the next three to six months.

But here is what is really interesting to me. We can actually look at the ratio of bullish to bearish stocks as a “breadth” metric which takes fundamentals into account. We can look at the broad based market ETFs and see how many stocks have Very Bullish / Bullish ratings, how many have Neutral Ratings and how many have Very Bearish / Bearish Ratings.

What about the sector ETFs? Can we get a gauge on which sectors of the market are the strongest based on our model? The Technology Select Sector SPDR ETF (XLK) currently has 30 Very Bullish / Bullish stocks and only four Very Bearish / Bearish stocks.

We can monitor this metric everyday to see how it changes and get a sense of the overall health of the market. Generally speaking, when there are more bullish than bearish stocks, the market is in good health. Obviously, there will be extremes where it makes sense to take a more contrarian view, but that is often the case with most, if not all, market indicators.

Is breadth alone the reason to take a bullish or bearish view on the market? As with all market indicators: technical, fundamental or a combination of both, breadth metrics should be used in conjunction with other forms of analysis in order to obtain a more insightful view.

Let’s go back to the baseball analogy for an example of why breadth alone is not enough and way it may make sense to look for new ways to measure it. In 1980, my beloved New York Mets drafted Billy Beane. Beane was considered a “Five-Tool player” at the time. However, he never met the expectations that the scouts had for him. Beane bounced between the major leagues and minor leagues over a 10-year professional career before becoming a scout for the Oakland A’s. He was eventually promoted to the role of General Manager where he adopted a new and different way of evaluating the “breadth” of skills of a ball player known as Sabermetrics.

His transition was the subject of a book written by Michael Lewis called  Moneyball: The Art of Winning an Unfair Game which was later made into a movie documenting how the team used the new metrics to become successful. The Athletics reached the playoffs in four consecutive years from 2000 through 2003. In 2002, the Athletics became the first team in the 100+ years of American League baseball to win 20 consecutive games. So, in this case, breadth didn’t matter for Billy Beane’s playing career – but like a good market, he came back to make new highs.