Markets opened lower and with a small selloff that took the S&P 500 to a support level in the 4150 area. For most of the day it consolidated as news from multiple angles stalled any direction. There was the Atlanta Fed conference which featured several speakers, Robert Kaplan being one of them, and of course the US-Iran nuclear deal, inflation, earnings, and infrastructure debates. At days end the markets rolled over as $1.5 billion in sell imbalances hit the tape at 3:50. That took the S&P 500 down to 4125, another support area. The late session slide came after Monday declines.

Defensive sectors, REITs, Healthcare and Utilities were the only sectors up Tuesday. While energy fared the worst on the day. Treasuries were unchanged to slightly weaker. Dollar weakened on the major crosses. Gold finished up fractionally after gaining more than 1.5% Monday. Bitcoin was on the defensive again after China reiterated opposition to digital tokens as a form of payment. WTI crude finished down 1.2%, though off worst levels following Iran nuclear deal headlines.

S&P futures down 0.8% after US equities finished lower for a second straight session on Tuesday. Weakness in mega-cap tech is continuing while we saw some reopening names and former market darlings doing better. Asian markets lower overnight with Japan down better than 1% and Australia closing on six-week lows. European equities weaker with a number of indexes down over 1%. Treasuries mostly weaker with global bond yields rising. Dollar stronger on the major crosses. Gold off 0.6%. Bitcoin futures down ~9%. WTI crude down 2.0%.

As oil makers are to oil, so are gold miners to gold. They usually track the commodity closely. I’ve been pointing out for several weeks the gold chart below, where we had two levels of resistance, a confluence of levels, that if breached could lend itself to higher highs. This has played out and the RSI is only at 56. This could be a signal that the trend can continue. 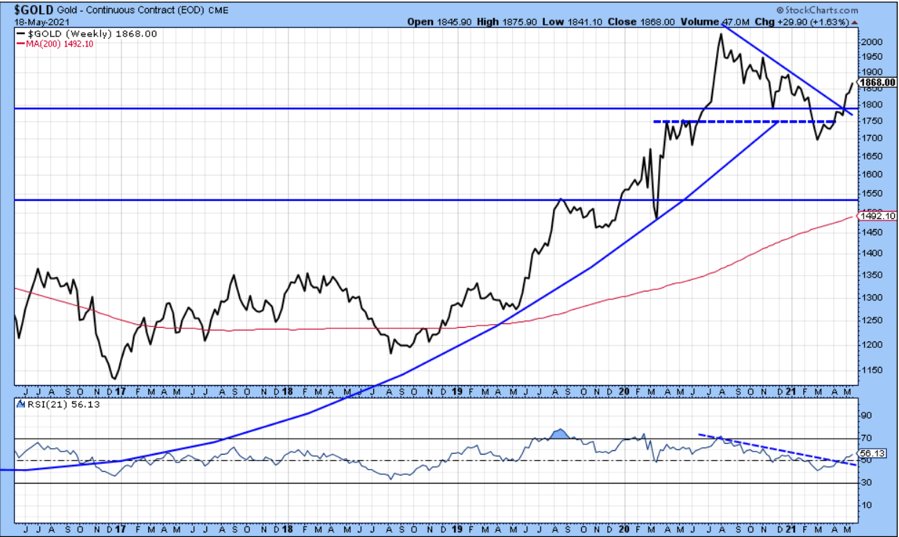 This is a preview of Morning Insights.