This is not a commentary about social distancing, or the need to stay away from large gatherings due to the risk associated with the spread of the coronavirus—although it could be, because we are all very well read on the supposed need to do so.  It is about the risk to investors who follow the conventional wisdom and find themselves among the crowd.  As a follow up to my post a few weeks ago Climbing a Wall of Worry,  I wanted to relay just how stretched the negativity is on the stock market.  I will share three quotes that I have always loved about the markets from three great investors:

Marty was my longtime friend and mentor, and he absolutely saw first-hand how often the market moves opposite to what so many people think it should.  All three of these quotes reference the fact that human nature and psychology can actually hurt investment returns because the stock market so frequently frustrates the largest number of people by the way they are positioned.  My favorite of the three is probably Sir John Templeton’s because it really describes how the mood of people are manifested at different points of the market cycle.  “Die on euphoria,” is a perfectly pithy description of a bubble.  We would joke that when the cab driver in New York is giving you a stock tip, the market is probably going to go down soon.  “Check out Anacott Steel, I think it’s got another 10 points in it!”

Stating the obvious, the fundamentals and economic activity ultimately drive stock prices and the backdrop now appears to be dismal.  That’s where the pessimism and fear creep in and it is psychologically so difficult to accept that stocks could actually go up in the current environment.  Let’s revisit the AAII numbers that come out every week, and see where they were in the last survey: 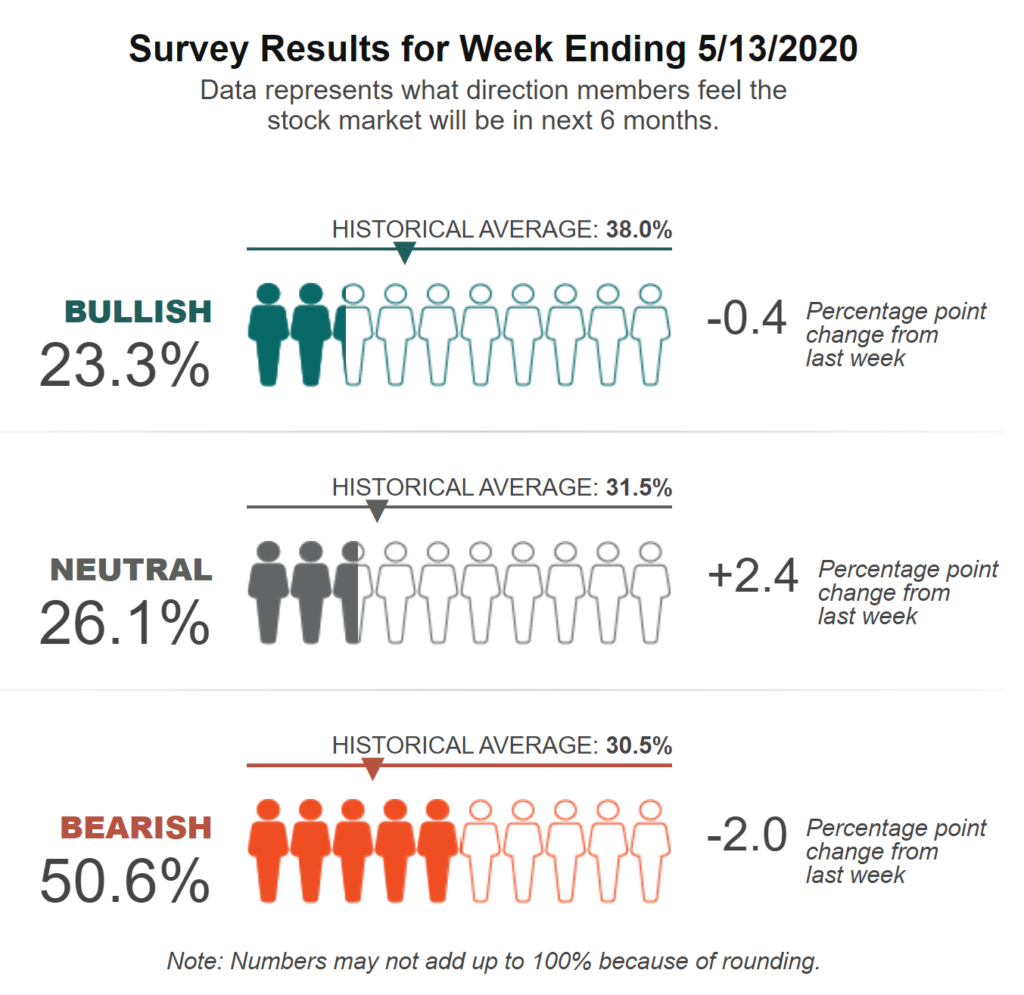 To see the bearish level above 50% for the last two surveys and see the difference between bullish and bearish remain over 27% to the bearish side is extreme.  It’s hard for the market to trade lower when so many people are bearish.  As my colleague Dan Russo wrote a few days ago in his blog Maybe the Market is Not Wrong on the Economy, the market might be discounting a return to more normal sooner than we can see it.  His larger point is there are definitely areas of the market we should be looking at for opportunities and attempting to “be greedy when others are fearful” as the Oracle of Omaha would say.

Another way of looking at the actual positioning of traders is using the commitment of traders report on the S&P 500.  These are traders who are “speculating” on the market and this is their positioning:

So clearly the “specs” are still quite short the S&P500, and even though they are less short than the last three weeks, it is still close to recent extremes.  There are other ways to measure the sentiment of the market participants, such as the put-call ratio and surveys of market strategists, and most are leaning towards bearishness, if not outright so.  None of my colleagues or I would advocate being aggressive buyers at these levels, but if you find yourself bearish on the market, unfortunately you’ve got a lot of company and the trade is crowded.