After a strong overnight rally Wednesday, the US equity markets took a bit of a dive at the open but managed to finish mostly higher in Thursday trading, ending just off best levels after the morning to midday weakness. Even with that volatility, the S&P topped Monday’s record close, but small-caps were weaker. Communications services were the standout on FB earnings. Financials showed some strength with the banks rallying. Technology was lower as AAPL gave back pre-market gains despite strong results. Software sector was also a laggard. Healthcare was also lower amid the latest pharma earnings disappointments. Treasuries mixed with some curve steepening. Dollar was higher vs yen but little changed on the euro cross. Gold finished down 0.3% and WTI crude settled up 1.7% to finish above $65/barrel for the first time since mid-March.

The FANG composite  The NYSE® FANG+™ Index is an equal-dollar weighted Index designed to track the performance of highly-traded growth stocks of technology and tech-enabled companies in the technology, media & communications, and consumer discretionary sectors such as Facebook®, Apple®, Amazon®, Netflix®, and Alphabet’s Google.

We can see that the chart has been reflecting a downtrend confirmed by the RSI. Support wasn’t far away but the RSI didn’t break down. With earnings coming out strong on most of the names in this index, especially Apple and Facebook this week, and Amazon crushing numbers last night, this has staged a marginal rebound. The long term trend line is acting as an area of support and seems to be significant. This is the area to be watchful for any breakdown. 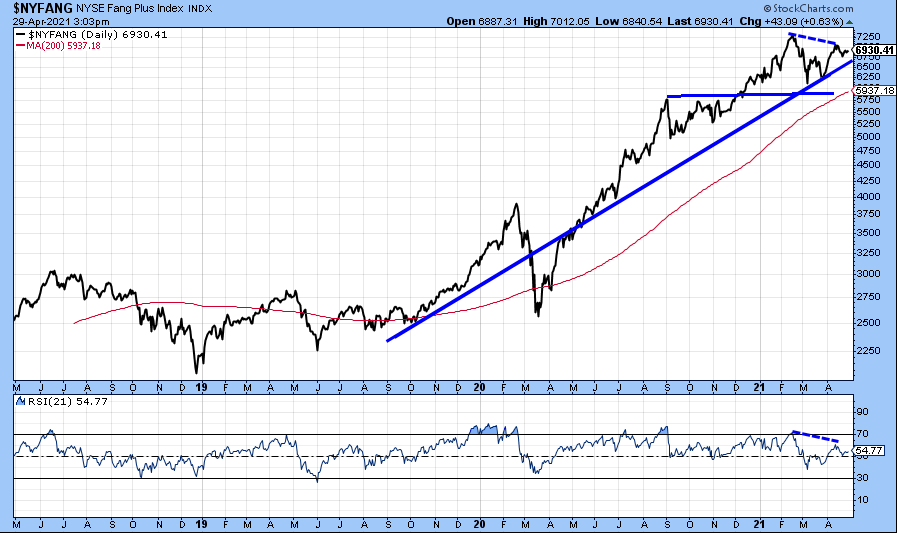 Since the dollar started its decline after the recent peak in March, stocks continued to have this factor as a tailwind behind their recent moves to new highs. When the greenback starts to see some strength the markets sometimes take notice and trading gets noticeably choppier for risk assets. Since the dollar has sold off it looks to be finding some support as it approaches the oversold status. I’m using the US Dollar Index – cash settled chart to get a longer term perspective and this chart is an end of day price picture. I’ll reiterate what I said a week ago, this seems to be an area of support, especially since it is almost oversold. If the fade from the resistance level of $94 – $95 was a tailwind for equities over the past several weeks, a move higher might have a slowing effect due to the inverse correlation. Note the lower panel where the rectangle is drawn how the SP Index flatlined for a period of over a year when the dollar had its last big move higher. Now accommodative policies can help sustain the markets in a rising dollar environment as well. Something to keep in mind is also the support level, and if broken, the move lower in the dollar could spell more upside in risk assets especially if the lower support area gets in sight, $84-$85 is the low end of that zone, not seen since 2014. 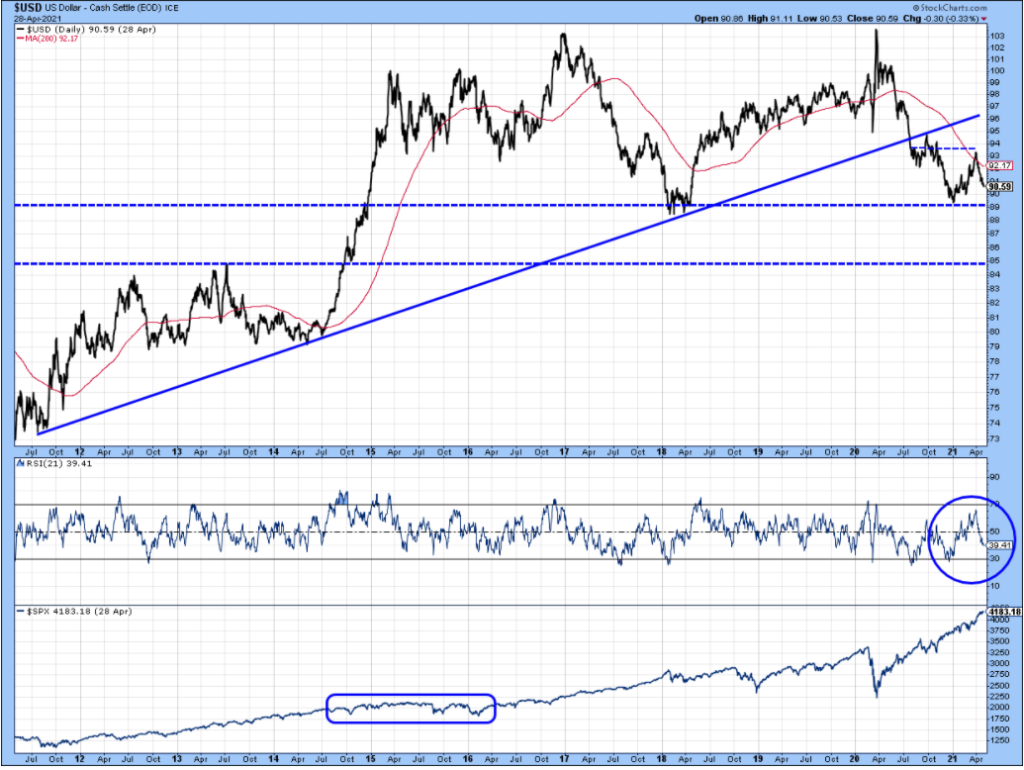 S&P futures down in Friday morning trading after three of the four major indexes gained on Thursday. US equities are on track to finish mostly higher for the week. Asian markets lower overnight with Hong Kong and China among the laggards. European markets are mostly higher though upside limited. Treasuries unchanged to weaker at the middle of the curve. 10-year yields on track for first weekly increase since the start of April. Dollar firmer vs euro and little changed vs yen. Gold is little changed and we have WTI crude off 1.1% however it is putting in strong weekly gains.

The seesaw action continued yesterday after solid earnings from Facebook and Apple. The markets were rallying all night Wednesday into Thursday morning and decided to do a 180 degree downturn at the open. A spike higher at 9:30 AM left everyone wondering, “what happened?” as it rolled over to test support in the 4175 – 4180 zone. Buyers stepped in and moved the index back to almost where it began the day. There is no good answer as so many factors go into the opening ranges but my guess is, sellers felt the heat of the growth prospects being sustainable based on the levels they see reported, as companies record massive earnings beats this quarter. The concerns are reflected in the price action regarding peak growth and the fact that the earnings and revenue bar has so much higher. It is as simple as that, just a concern at the moment. Also, inflation keeps coming up in the post earnings conference calls as corporate America keeps referring to it as a possible headwind for growth. Yet, markets continue to put in new tops. Could be a dash of seasonality as well. Let’s review.