Did the Oracle of Omaha Just Confirm The Inflation Theme? - Chaikin Analytics
Skip to content

Warren Buffett has been making news lately with some of the investments that he and/or his two portfolio managers have been making.

The first “big news” event came in the middle of August when investor’s 13-Fs were released. It was revealed that Berkshire Hathaway has accumulated a position in Barrick Gold (GOLD). Many people took this to mean that Buffett has bought gold, the physical metal, but that is not the case. He bought shares in a gold mining company. Yes, it is leveraged to the price of gold, but there is still an operating team running the company. Additionally, Buffett has stated in the past that he is not interested in buying gold (the metal) because it does not generate income. The news is that one of the world’s greatest investors found a way to invest in the theme in a way that makes sense for his unique style. Here is the  article from the Wall Street Journal with more details.

Then, yesterday, it was revealed that Buffett, through a subsidiary of Berkshire Hathaway called National Indemnity, was making a $6 billion bet on Japan’s five biggest trading houses. As the Financial Times puts it, these companies are the century-old commodity specialists that are increasingly transforming into global venture capital and private equity businesses. You can read more here.

So why does this intrigue me so much? First, because I have been a big fan of Buffett’s since I was in high school. It’s actually kind of ironic that with this being the case, I am not more a value-focused investor and instead someone who starts with the technicals and relative strength. But, I admire greatness and there is no denying that Buffett is one of the best of all time.

The second reason is because I believe that the two most recent headline grabbing developments from one of the greatest investors in the world, supports a theme on which we have been focused and vocal for more than a month. That theme is rising inflation. In fact, we first started to write about this theme in late June. In the June 23rd Market Survival Guide note, we asked the following question: Are we Heading Toward Stagflation?

In the note, we argued that the combination of fiscal and monetary stimulus had the potential to lead to rising inflation, the “flation” in stagflation. Since then, we have seen many confirming data points to increase our conviction in this view. First, there has been a steady rise in the price of commodities as we can see here in the Invesco DB Commodity ETF.

Commodity strength has also played out as the dollar has weakened as the Federal Reserve and the government have undertaken aggressive measures to help the economy. However, one of the consequences is likely to be a continued trend of weakness in the greenback, which is inflationary.

From there, we can look to the treasury market where inflation protection is trading near record highs. The iShares Tips Bond ETF (TIP) is in a steady uptrend as fixed income investors position to protect their purchasing power from the currency debasement discussed above.

Finally, Emerging Markets, which are leveraged to a weaker dollar and rising commodity prices, have been in a steady uptrend since the March lows in asset prices and for a time were actually leading large cap US listed equities. 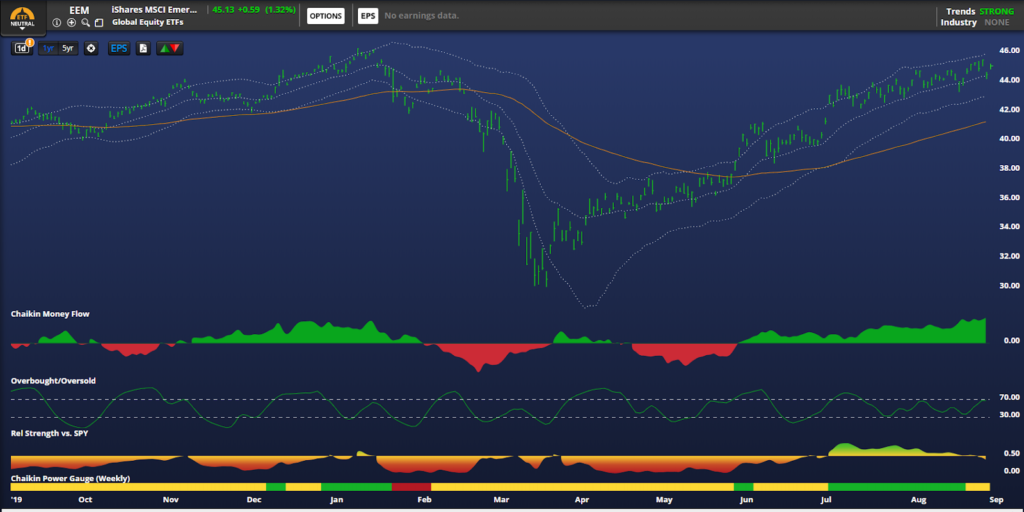 While nothing is a given, especially in the asset markets, there are enough data points coming together to say that the odds favor an environment of rising inflation (we didn’t even discuss commodity currencies such as the Aussie Dollar). It is interesting to note that these trends have been in place for a few months, allowing us to identify them ahead of the curve. The rest of the investment world is waking up to this possibility on the heels of the Fed’s policy pivot, announced last week at Jackson Hole. It also seems that one of the greatest investors in the world is positioning accordingly!