Gaining Exposure to The Blockchain - Chaikin Analytics
Skip to content

Every Monday afternoon we host a call for Chaikin Analytics members where we go over our thoughts on the market, key investment themes and ideas, and the industry groups where we see strength and weakness that has a high probability of persisting.

After touching on what we feel is important in the current environment, we open the call to questions, which is honestly my favorite part of the call. Our clients are very engaged and ask great questions across a broad range of subjects. Some are interested in individual stocks, others may be interested in the implications of the current trade war between the U.S. and China and some people are interested in how an impending decision from the FOMC may impact the market.

More and more though, we are receiving questions on how to invest in “blockchain.” As I have spent time thinking about it, it occurred to me that there is no way to invest in blockchain, per se. To me, blockchain is a platform on which applications will be, and are being, built and implemented. The clearest example so far is cryptocurrency. Bitcoin is essentially an application (digital currency) that uses the blockchain platform. Here is how The Internet Society describes it:

Blockchain technology enables distributed public ledgers that hold immutable data in a secure and encrypted way and ensure that transactions can never be altered. While Bitcoin and other cryptocurrencies are the most popular examples of blockchain usage, this “distributed ledger technology” (DLT) is finding a broad range of uses. Data storage, financial transactions, real estate, asset management and many more uses are being explored.

This reminds me a lot of the internet in the mid-90’s. The internet was a platform on which applications and, ultimately, companies were built.  As investors, we could not buy shares in the “internet”, but we could have bought shares in the companies that were using the platform to create disruptive businesses. Think AMZN, EBAY, CSCO and AOL at the time. We’ll leave pets.com and some of the other notorious blowups out of this for now.

There is no doubt that investors are interested in blockchain and are looking for ways to invest. And as with many popular themes, there are ETFs which have been launched to give investors access to them. A quick search led me to ETFdb.com and a list of eight ETFs which are, in theory, designed to give investors exposure to “blockchain.” Many of these funds invest in companies which are perceived to be building businesses on the blockchain platform or helping other companies build their business on the platform.

What immediately jumps out at me is that these funds are generally small, the largest one has just over $100 million in AUM. So far they appear to be thinly traded, with the most active having an average volume of just over 20,000 shares / day. 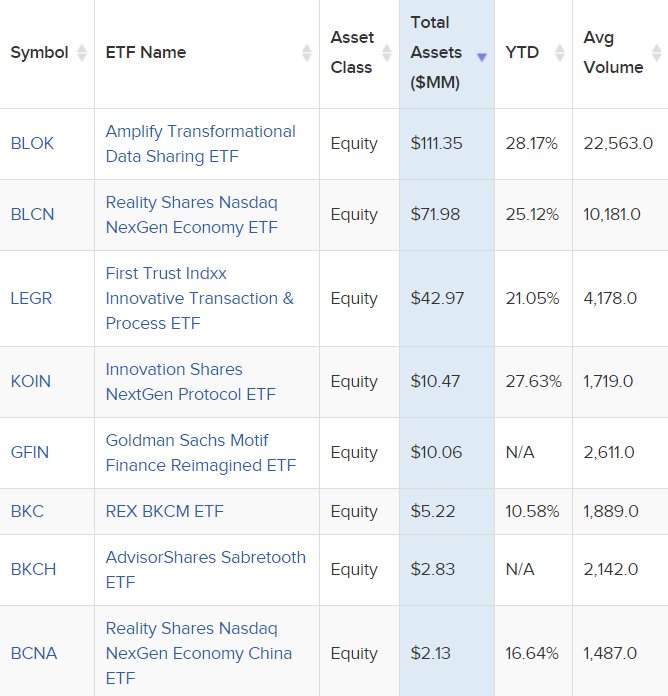 Finally, as I drill down on the holdings, I can see that there is a fair amount of exposure to stocks that are traded outside of the U.S. markets. I am not making a judgement on this attribute, just pointing it out.

What do you do as an investor if the size, liquidity and foreign exposure of these funds are a concern? You can head over to the websites for any of these ETF providers and quickly download the fund’s holdings into a spreadsheet and save it to your computer. From there, you can upload the ticker symbols into Chaikin Analytics as a User List. The U.S. listed companies from the spreadsheet will now be in one place for evaluation using our 20-factor model to come up with their Chaikin Power Gauge Rating.

I did this with the Amplify Transformational Data Sharing ETF (BLOK). According to the fund’s site, BLOK is an actively managed ETF that seeks to provide total return by investing at least 80% of its net assets in equity securities of companies actively involved in the development and utilization of blockchain technologies.

We like to take a top down approach to the market with a focus on the sectors and industry groups which are outperforming. This gives us a good starting point from which we can begin to identify stocks that have the potential to outperform the broader averages. The same holds for different themes. We can see that BLOK has been leading the SPY since June. Chaikin Money Flow is bullish which is a sign of accumulation and the fund is trading above a rising long-term trend line. So from a top down perspective, this appears to be a theme which may continue to outperform.

Now we can take the list of stocks that we have uploaded to Chaikin Analytics and begin to evaluate them them to find the best prospects for exposure to the blockchain theme. One thing to keep in mind is that many of the companies are well established and are not “pure play” blockchain investments. Currently, 16 of the companies which are holdings of BLOK have a Chaikin Power Gauge Rating which is Very Bullish or Bullish.

Let’s take a look at a stock which is a holding in the fund and has a Bullish Chaikin Power Gauge Rating, Visa, Inc. (V). Visa is rolling out a blockchain-powered business-to-business payments service, first made public in October 2016, called B2B Connect. You can read more about it  here. No one knows if this will become a major part of Visa’s business but it is clear that they are utilizing blockchain technology to innovate on their payment platform.

Looking at Visa through the lense of Chaikin Analytics, we can see that the stock has many of the attributes that we look for when running through our research process. Visa has a Bullish Chaikin Power Gauge Rating and has been outperforming the market for most of the past 12 months. Chaikin Money Flow has been persistently bullish since January and the stock is trading above the rising long-term trend line. 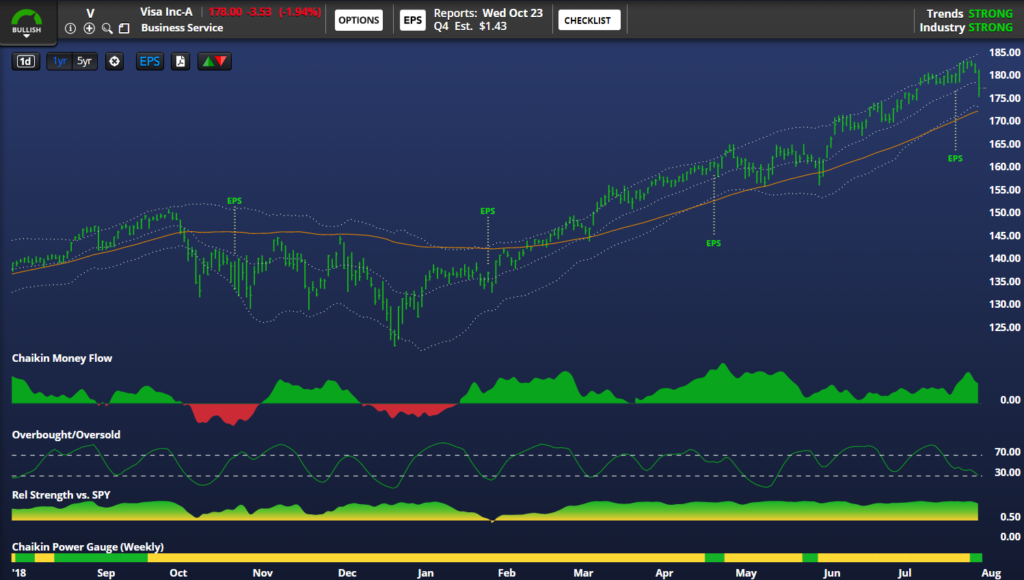 A quick look at our Pre-Trade Research Checklist  shows us that the weight of the evidence supports continued outperformance by Visa. 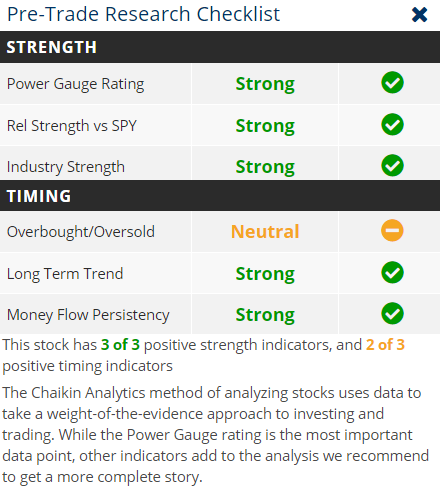 It is hard to say with any level of certainty if blockchain will be the next internet, but for investors who seek exposure to this emerging theme, this is a good way to isolate strong stocks which have the potential to benefit should blockchain become the next big thing.