My sister hosts an Easter brunch every year at her house. Every year there is an Easter Egg Hunt in her yard. There are roughly ten children who take part in the hunt and they range in age from nine years old to three years old.

The eggs are well hidden but my sister and brother-in-law make it so that there is a reasonable chance for all of the children to find a fair amount of eggs. The hunt actually starts when all of these children begin to look out the window for an early peek at the yard. We finally let them loose and it is the most amazing thing to watch. Every year, without fail all ten of them go running in the same direction following the cry of “found one.” Then they all linger in the area of the first egg, all chasing the few eggs that are left in that general area.

Meanwhile, the rest of the yard is full of eggs and it is empty, devoid of children who could be gathering eggs to their heart’s content. I finally grabbed my younger daughter and gave her a quick word of advice. I said “Gabby, go to the parts of the yard where there aren’t any other kids!” She listened and she mopped up the egg hunt. Gabby is four years old and the second youngest child in the family but she gathered the most eggs on Sunday.

Of course the first thing that came to my mind was this is exactly how most investors act. They flock to the latest hot trend and whatever is the focus on CNBC. They are chasing Bitcoin into the 2017 highs just as the business media has its price as a “widget” affixed to the bottom of the screen. They are chasing AAPL because it’s $1 Trillion market cap is the talk of the market. And it is not just the investors, the analysts are prone to this bias as well. Remember when a top bank made NVDA a “conviction buy” near the highs?

Just like during the Easter Egg Hunt, following the crowd in the market is not likely to lead to positive outcomes over the long run. If you find that you are often on the same side as the crowd right as the trend begins to turn, it is time to reevaluate your process and to begin to think differently. How do you know when you are in a crowded trade? A good rule of thumb is that when the media begins to discuss it, it is getting late in the trade. When the media discusses it constantly and even puts a widget at the bottom of the screen, it is really late you should think about going the other way.

Now there are some crowds that are worth following. For instance, institutional and professional investors tend to process important information faster than the average investor and media personality. These are the types of investors who “see” the changes before everyone else. Individually, they may not always be right but as a group, we can increase our odds of success by monitoring their behavior. How do we do this? With the Chaikin Money Flow Indicator which was designed to give us a clue as to what large institutional investors are doing in a stock. Guess who was selling AAPL just as the average investor was chasing it into the highs? Notice how in October, as AAPL peaked, Chaikin Money Flow was red, meaning the institutions were selling to the average investor who was chasing the news. 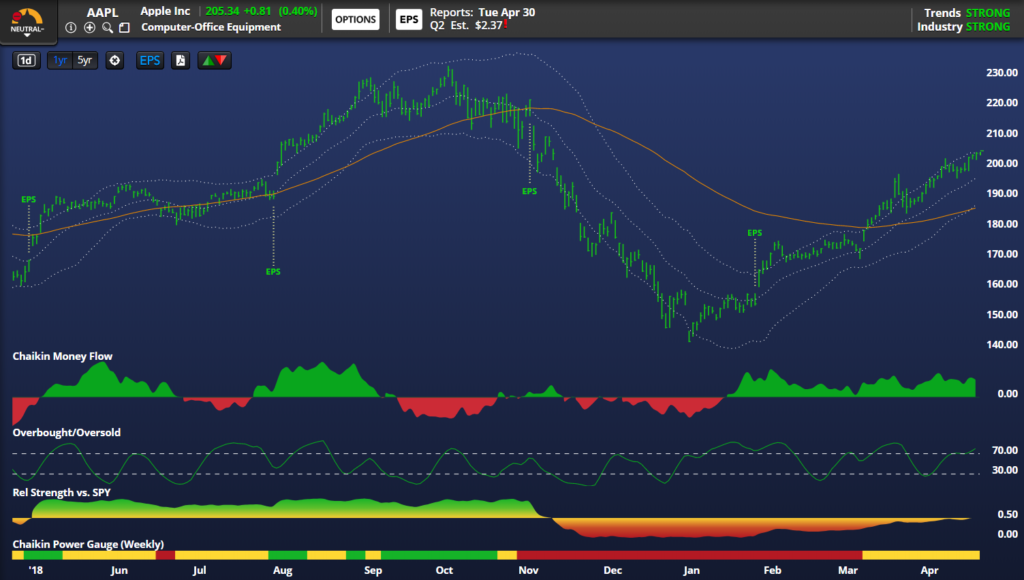 Just as my daughter Gabby followed the “smart” advice to go hunting where other people weren’t, Chaikin Money Flow allows you to follow the smart money, not the crowd and not the pundits on TV.I will leave you with a quote from Bernard Baruch, the namesake of the college where I am now teaching a technical and market analysis class:

“The main purpose of the stock market is to make fools of as many men as possible.”