What do you think about when you encounter the phrase “swing trade”? Buy at the bottom of a stock’s trading range and then sell at the top. Yeah, right. Who doesn’t want to do that! Often, though, such aspirations translate to fanciful daydreaming, especially when one tries to confuse it for day-trading. Actually, though, the unflattering stereotypes combined with unyielding commitment to sound financial principles combine to make the recently-introduced Chaikin Analytics Bullish Swing Trade Screen a candidate for becoming my new favorite source of new ideas.

Recently introduced as a “starter screen” on Chaikin Analytics, the screen begins by identifying stocks within a Russell-3000-like universe that is rated Bullish or Very Bullish under the Chaikin Power Gauge model. That’s just one item, but it covers a lot of territory, including classic fundamentals such as Return on Equity, Debt, Earnings growth and consistency, industry strength, and Valuation. (Click here for more on the rank factors.)

Using this as a starting point immediately removes the screen from the realm of the fanciful and plants it squarely where we want to be, in the world of good financial fundamental sense. It allows us to assume that any stocks with good technicals, as defined in the screen, has them for sound legitimate reasons. Put another way, the screen stands squarely in the “technamental” camp.

Here are the remaining screening rules:

The usefulness of a screen is determined by the extent to which it helps you identify stocks worthy of being evaluated. We’re looking for a small personal (designer) stock market that is carved out of the larger market. This personal stock market should be limited to a manageable (analyzable) number of stocks all of which conform to your investment goals, and a successful screen is designed such that the probability of identifying winners is greater than it is for the market as a whole. 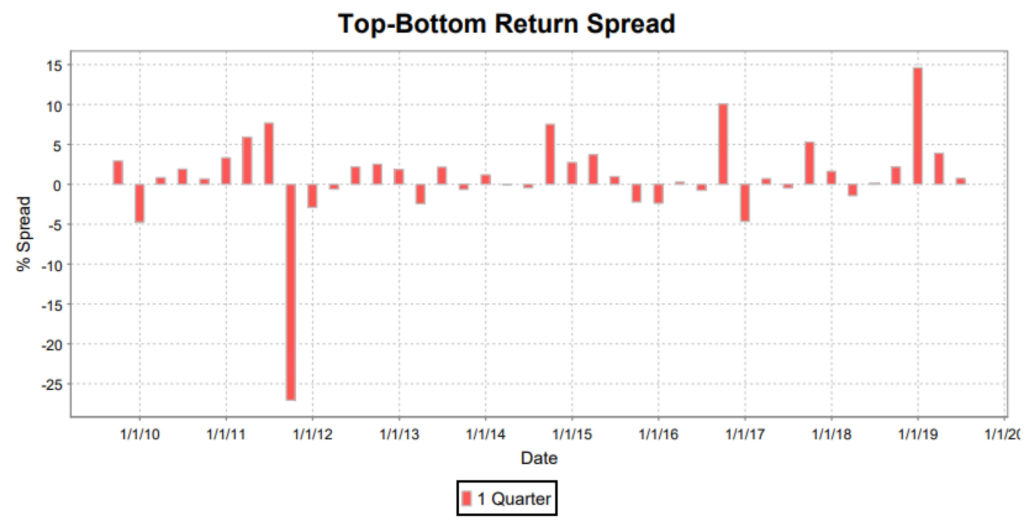 As seen, and as discussed when the image was introduced last week, notwithstanding the quarter from hell in 2011 (when the market was being plagued by such unfortunate oddities as the Arab Spring, and the Greece-Euro crisis), you would have been better off making choices from the limited, personal screen-created stock market than from the much-bigger general market.

That assumes quarterly holding periods. To many, that might seem like a long time for a screen whose name includes the phrase “swing trade.” Figures 2 and 3 show what the spreads would have been had we used monthly or weekly hold periods respectively. 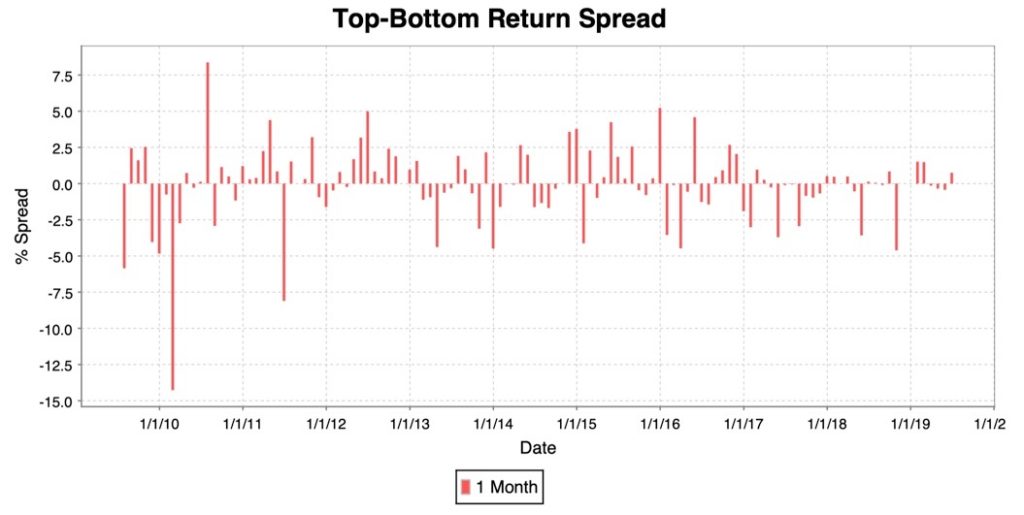 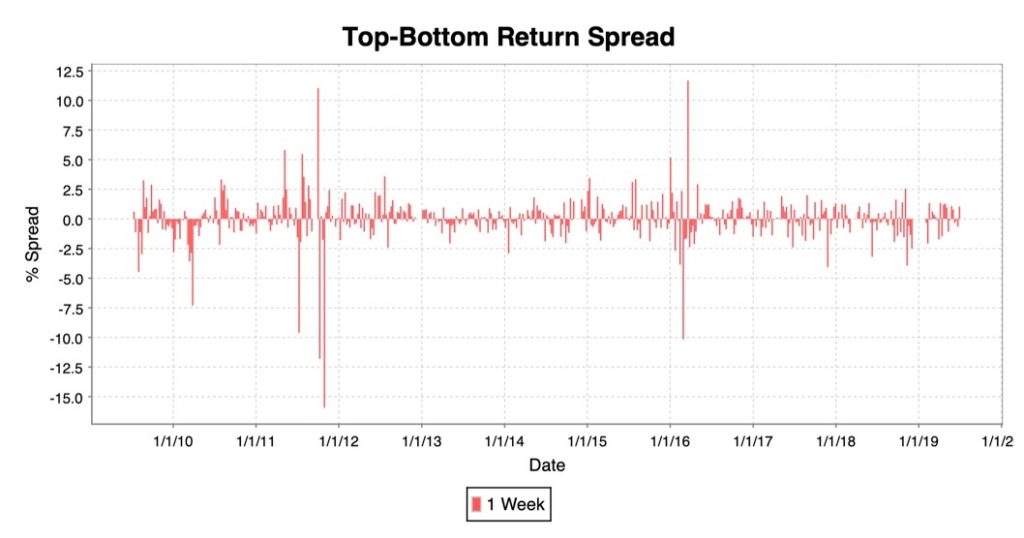 Whenever any strategy has the “word” trade in its title, it’s tempting to assume one has to move quickly, to act on the latest information as quickly as possible. Although vendors of hardware to enable super-high-speed trading might not want to hear it, high speed may not be all it’s cracked up to be. Data may move in nano-seconds, but humans still move at human speed and ultimately, businesses and customers consist of humans. So to me, it comes as no surprise to see that the efficacy of the screen improved as the assumed holding period stretched. Stories need time to develop and get reflected in stock prices.

Figures 4, 5, and 6 break the test down into subsets of the Russell 3000; the top-third (in terms of market cap), the middle third, and the bottom third respectively. 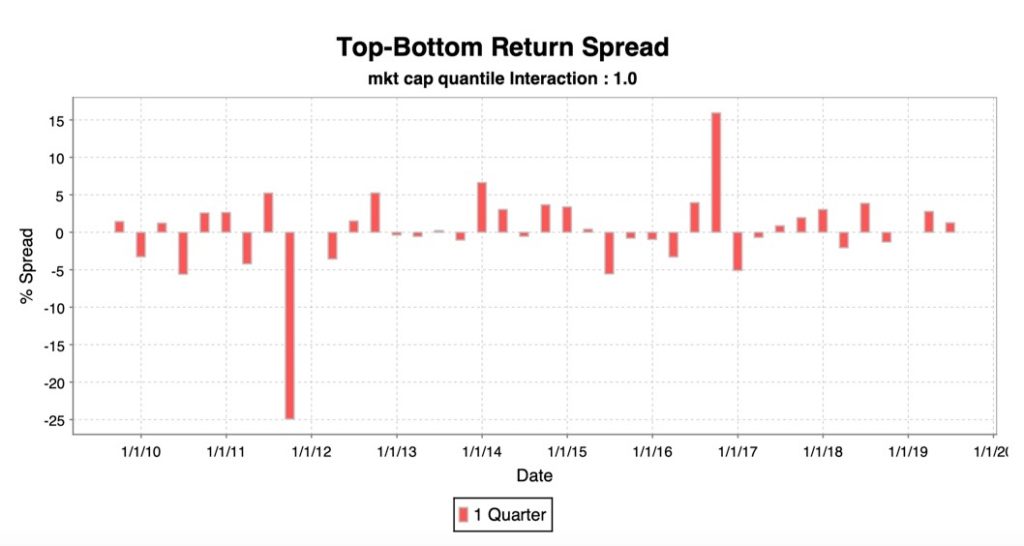 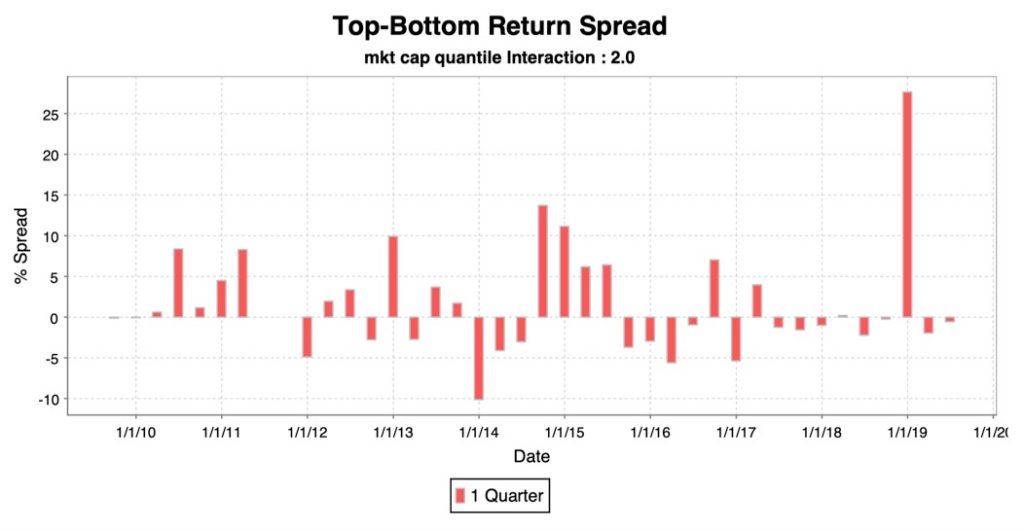 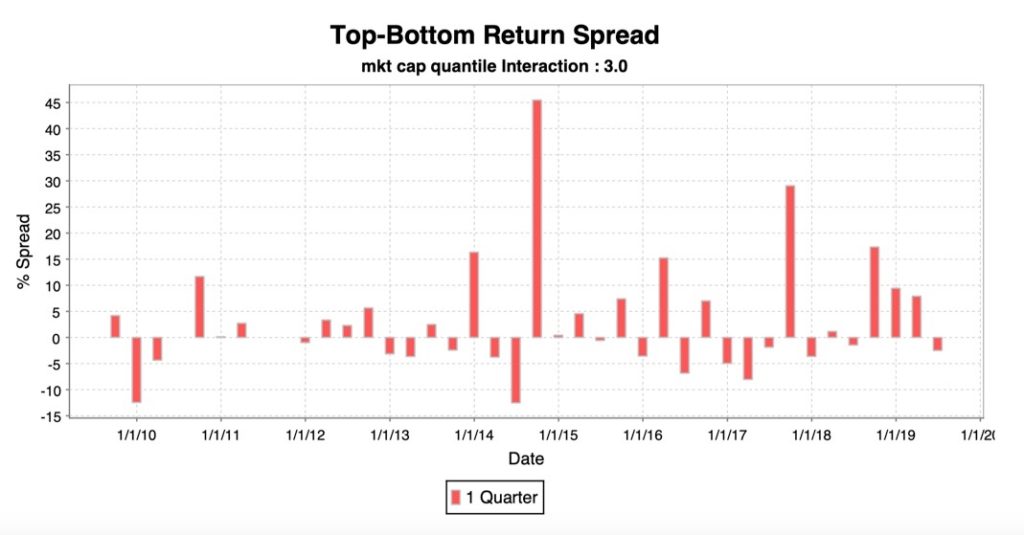 Many who are experienced in screening and other forms of quant work often notice that their models tend to be more successful among smaller stocks. Some of this is attributable to test periods that include times when small-cap stocks were stronger in general. But even beyond that, it often seems that the large followings and exceptional availability of information about large-caps make market inefficiencies harder to identify and exploit. This screen seems noteworthy in that it has shown efficacy at all ranges of sizes, although the mid- and smaller- sized subsets seem to hold better potential for home runs.

When the screen was run on 7/22/19, the following stocks made the grade: