US equities were mostly higher in Friday trading, finishing near the highs of the day. REITs and Utilities outperformed while Energy and Financials lagged. Treasuries were mixed with the curve flattening. The dollar was little changed vs yen but was stronger on the euro and sterling crosses. Gold closed up 0.8%. WTI Crude ended down 2.0% but posted a fourth straight week of gains.

S&P futures up are 1.9% in early trading, S&P back above the 3,000 level and the 200-day moving average. Asian markets were higher overnight and European markets are seeing strong gains today. Treasuries are weaker with the curve steepening. The dollar is under pressure vs the euro and sterling but flat vs the yen. Gold is down 0.6%. WTI Crude is up 2.7%.

Testing The Top of the Resistance Zone

The SPDR S&P 500 ETF continues to test the top of the resistance zone between the $293 and $300 levels. The fund is lagging the IWV (Russell 3000 ETF) as small caps have shown better relative strength of late. SPY is now overbought with bearish Chaikin Money Flow as it trades near the declining long-term trend line. A break of resistance opens the door to a move to $311, beyond that, the February highs come into play. On the downside, near-term support is near $285.

A Closer Look at Sector Rotation

The Communication Services Sector (XLC) Relative to the S&P 500

The S&P 500 Communication Services sector relative to the S&P 500 has rallied off of support at the 200-day moving average and has broken above the highs from late March. The RSI has moved to an overbought condition, lending a momentum confirmation to the bullish price trend. Trend: Bullish 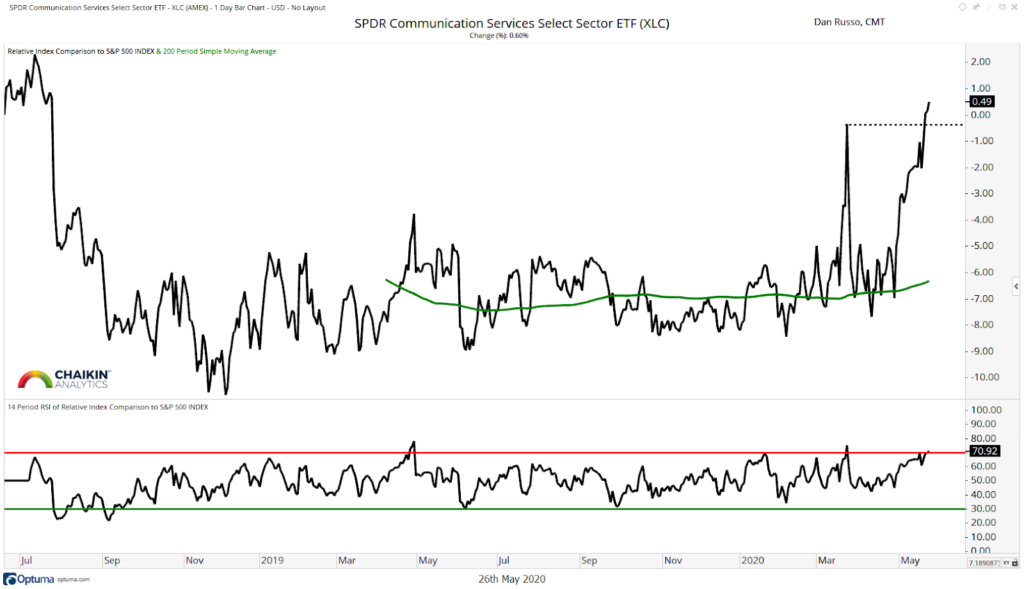 The Consumer Discretionary sector remains above the 200-day moving average and is now in the process of testing resistance at two-year highs. The RSI has moved out of bearish ranges and is now in an overbought condition, signaling that there is momentum behind the strength in the ratio.  Trend: Neutral / Improving