The Door is Never Closed: Keep an Open Mind in Life and Investing - Chaikin Analytics
Skip to content

I am getting married on April 6th. People get married all the time so why am I writing about it? Well, because I think mine is a good story and it has implications for investors and traders.

My fiance and I first met in the summer before our sophomore year of high school. We hit it off well enough and had a few long phone conversations (this was the pre-text era) about what seemed like important issues to 15-year-old kids but nothing really came of it. We had a group of friends in common so we would see each other from time to time and remained friendly.

Five years later, we actually began dating and were together for about two and a half years. I don’t remember why it ended. Maybe it had something to do with being young, starting careers and wanting to experience the world as young adults, independently. I blame her, she blames me and it’s a running joke now.

Fast forward 15 years and we reconnected on Facebook in December 2015. After a couple of weeks of conversation through text message, we decided that it would be fun to meet for dinner, so we did. We talked about life and everything that had gone on over the past 15 years. After about a year of friendly dinners, we started dating…again.

In his book, Market Wizards, Jack Schwager interviews the legendary trader Paul Tudor Jones. When asked about his seemingly uncanny ability to catch major turns in the market, PTJ responds, “Frequently, I try repeated trades from the long side over a period of weeks in a market which continues to move lower.”

What PTJ is doing is entering a trade, getting stopped out, and entering again. Presumably, his process (there’s that word again, it keeps coming up in these posts) is what dictated that he re-enter the trade. Despite taking a series of small losses, he is able to put the trade back on. This allowed him to catch the ultimate turn and make far more on the ensuing move higher than he lost on the initial trades.

Jones makes it sound easy but it isn’t. It is hard to take a loss on a position and then get back in if your process tells you that that is the proper move. We are emotional and we tend to take the losses personally. Remember, losses feel twice as bad as wins feel good. But, as I have written before, the market does not have feelings and it surely does not care about ours.

There are two key lessons here. The first is to have a solid risk management system in place. Know where you are wrong and get out of the trade. This puts you in a position to be aggressive and take advantage of the real opportunities when they present themselves. Were you in a position to put money to work in January or were you still long stocks that had been heading lower long before the December dive? By taking a series of small losses, you can preserve capital and have it at the ready when the best opportunities appear.

The second is to keep an open mind and try to eliminate your emotions as much as possible…when investing. Jones does not take the small losses personally and let them prevent him from reentering the trade. But we often struggle with this. We lose money on a stock and we try to forget that it exists. If someone mentions it, all we can think about is the loss. If our process tells us to buy the stock, we often ignore the signal because “we hate that name.” This is limiting to our success as traders and investors.

I have actually seen this exact scenario play out with professional investors. In late 2014 and early 2015, one of the analysts who I worked with became extremely bullish on the optical networking stocks. One, in particular, NeoPhotonics (NPTN) prompted him to give an impassioned pitch for the bull case during our morning research meetings. As a member of the sales and trading team, I left the meeting and began to call all of my clients who were interested in new ideas in the Technology sector. However, when I went through the idea with them, laying out the thesis and catalysts and other factors that made it a great idea, silence was the best response that I received. Many of the responses ranged somewhere between “are you kidding me” and “don’t ever call me on this name again.” I could not figure it out. The call seemed like a winner and the risk / reward was extremely compelling.

Then it hit me, OCLR had burned investors a few years prior when it fell from around $20 to $4 in a matter of nine months. Many of my clients had lost money trading this stock and the wounds were still fresh. They could not bring themselves to buy a stock which had cost them money in the past.  But they missed out, OCLR ran from under $3 to a high of $18 over the next 20 months after our analyst made the call. And I will never forget getting calls from some of these same investors when the stock was near $15 asking if we were still bullish because they were starting to “do work” on the name and “can I speak with with your analyst?” 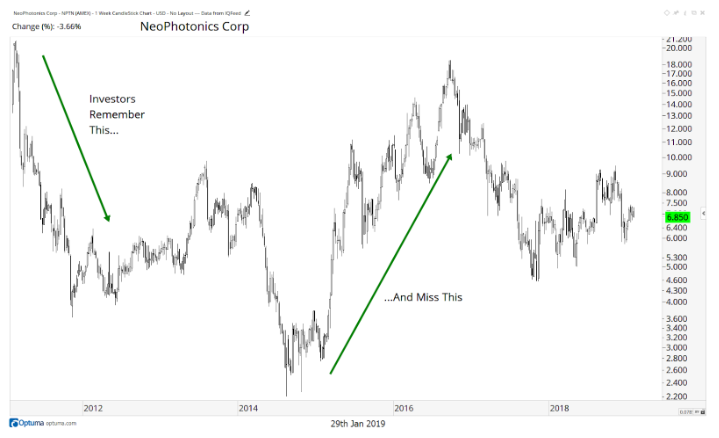 These investors let their emotions get the best of them and they missed a big opportunity. This is exactly why we advocate for having a repeatable process and doing all that you can not to deviate from it. That process starts with using our 20-Factor Model to identify which stocks are likely to outperform, in an objective way. By the way, the model was bullish on NPTN in late 2014 (see the green bar at the bottom of the chart below). 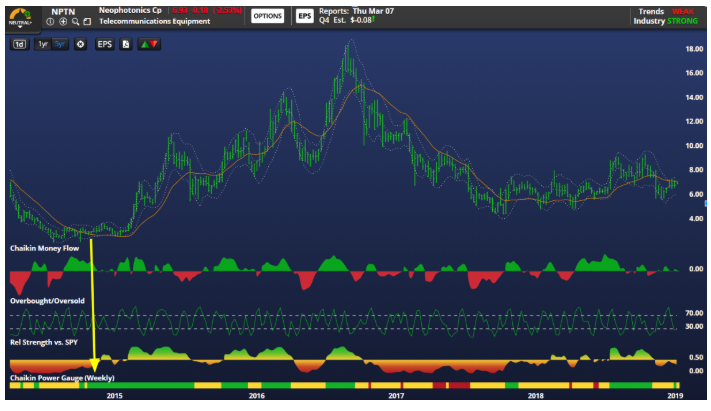 This is not an issue only for traders and professional money managers. How many investors sold the 2009 lows and never re-entered the market? Perhaps they went to cash in their 401k accounts and have missed this bull run.

In the market, an objective process helps us keep an open mind. In life, while there isn’t an explicit model, keeping an open mind can lead to something amazing. As for me and my fiance, what if one of us had not wanted to meet for dinner because of our history?  What if we let the “loss” from 15 years prior stop us from reconnecting? I’m glad we kept our minds open.