As many of you know, I am one of the Co-Chairs of the New York Chapter of the CMT Association. I help organize our monthly meetings and suggest great technicians to have speak at these monthly events. However, in December I get to take it a step further and be a part of the show. For the final meeting of the year, I moderate a panel of three technical analysts to run through their thoughts on the year and what to expect as we head into the new year.

This is always a fun exercise because I get to put these pros on the spot and pin them down on their best ideas and current views on the market in general, leading and lagging sectors and we add in some thoughts on rates and commodities.

This year we hosted Jonathan Krinsky of Bay Crest Partners, JC O’Hara of MKM Partners, and John Kolovos from Macro Risk Advisors. In addition to being great technical analysts, they are all good guys who graciously share their time with the CMT Association and I want to give them a special thanks now.

Here is what I learned from these market technicians while moderating the panel:

1. Current Market Sell-off: There was a generally view that the majority of the sell-off has already taken place from a PRICE perspective. JC pointed out that many investors and the media are overly focused on the “death cross” (when the 50-day moving average moves below the 200-day moving average) but he went on to say that when the cross happens, the majority of the selling has already taken place. John echoed this view by saying he thinks that the selling is ~70% complete from a price perspective but only ~30% complete from a time perspective. John equates the current market regime to what we saw in 2015 and 2016 and thinks that we may see a more choppy range-bound environment as 2019 gets underway. Jonathan also shared a similar view but presented it in a different way. He says that the daily average true range for the S&P 500 has expanded to the levels that usually signal that we are close to a low in the market but went on to caution that ranges can and do expand further. The key take-away is that sell-off is likely in the late innings but we should be on watch for a break of key support levels.

2. What about the seasonals? John had a great chart which pointed out that seasonally, this should be a bullish period and 2019 should be a good year based on the annual cycle, presidential cycle and the decennial cycle. My pushback here, which all the analysts agree with, is that the seasonal patterns have not been working this year. To me this is a tell, when the market is “supposed” to act a certain way and doesn’t, it is giving us very valuable information. However, while we all watch the seasonals and are aware of them, there are other factors in the research process which carry more weight when formulating a view on the markets. As I write this on Monday morning, the S&P 500 is down nearly 1% on the day and I have received a few questions from followers about the odds of the Santa Clause Rally taking place this year.

3. Bullish or Bearish? On What? This is a question that analysts receive a lot. Are you bullish or bearish? I always answer it the same way . . . on what? While everyone likes to focus on “the market” I like to focus on the different sectors and industry groups (and ultimately the stocks) which make up the market. When the S&P 500 began to roll over and broke below the 2,873 level in October, we advocated for adopting a defensive posture, we became bullish on the defensive sectors and the low beta stocks and bearish on the high beta cyclicals and momentum stocks. This is an important distinction. There is an old saying that “if you trade the averages, you get average returns.” There is always a part of the market which is leading and always a part which is lagging. It is our job to isolate those themes for our clients. Given where we are in the cycle and using his analysis of the Fed Recession Probability Model, JC pointed out that Health Care, Technology, Energy and Staples tend to outperform. Jonathan made a compelling case for Gold and John shares my view in favor of the low beta defensive.

The other key to answering the question is to establish the time frame. Are we talking about the next week, six months, 10-years? The time frame matters. All three analysts pointed out momentum and breadth divergence which have the potential to spark a rally in the near-term.

Finally, knowing that John has spent a fair amount of time during his career analyzing markets outside the U.S., I pressed him for his view here. Many analysts are making the case that because of valuation, now is the time to favor foreign markets over domestic (for U.S.) investors. John was not buying this view right now and still favors the U.S. based on this trend work.

4. Yield Curve: While the majority of the conversation was focused on equities, JC brought up a great point about the yield curve by saying that inversion is a very consensus view and wondered what might happen if the curve does not invert as the majority of investors currently expect. Jonathan discussed the breakdown in the banks I pointed out that my view is that bank weakness is partially a function of the flattening yield curve. But again, this is a consensus view. It stands to reason that if the curve does not invert, the banks should see a rebound. Remember, the market tries to make a fool of the greatest number of people possible at any given time. As JC points out, the yield curve inversion camp is very crowded. A quick search of Google Trends illustrates the point: 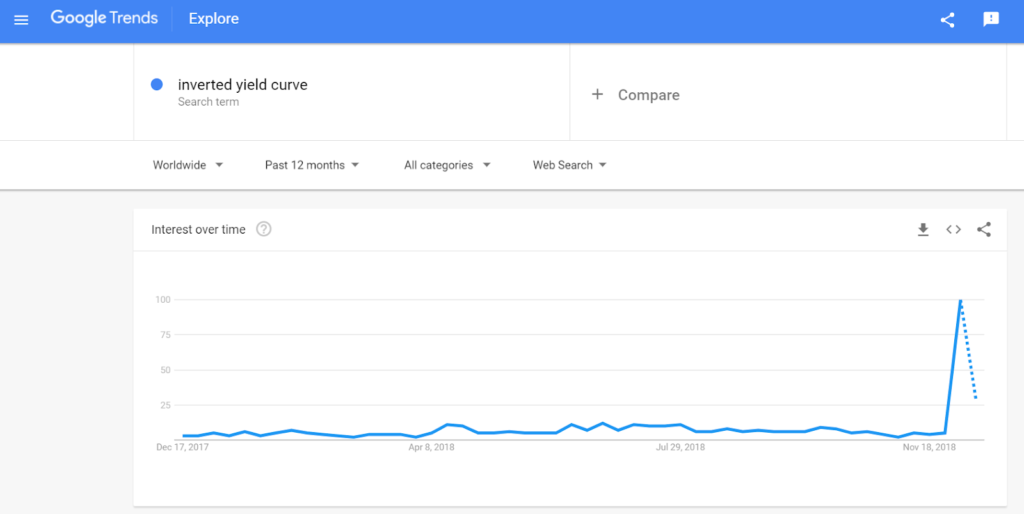 These end-of-year discussions are always informative because they help us get a better understanding about how investors see the current environment. But you will notice that something is missing. I did not provide year-end S&P 500 targets from any of these analysts. Why? Because, they don’t know. And for that matter, I don’t know. No one does. All we can do is size up the current environment with the information that we have, incomplete though it may be, and held guide clients through the year.

We love to hear your feedback. Let us know the areas of the market that you see leading in the first quarter of 2019.

1 thought on “What I Learned From Three Market Technicians”